Reviewing Opta statistics for goalkeepers, central defenders and full backs was easier in terms of how to classify each position because as I explained in my first post on formations, almost every team lined up with a back four last season (on only 21 occasions out of 760 did a team not start with a back four).

Now that we are looking at midfielders, although four ‘flat’ midfielders was also the most common line-up, in general there was a lot more variety. A defensive midfielder should not really be compared with a winger, so I have had to be more careful when it comes to classifying the position that a midfielder plays depending on his position in the team’s formation. As we will see later, by pigeon-holing players in this way the review may be flawed for some players who qualify for the CM category but in reality are more defensive than average.

For transparency, I have listed my classifications below: 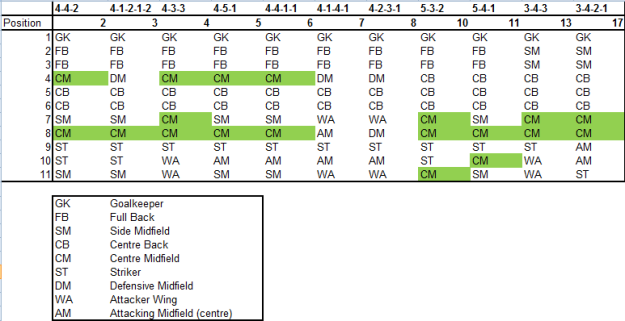 As we can see from the above list of CMs, which is fragmented by the formations, it was more of a challenge to remove the players who did not play in this position from the initial correlation review – due to the less consistent position ids. I also removed players with fewer than 1000mins in the position of CM in order to maintain consistency with my previous reviews .

I found that offensive statistics for CMs dominate defensive statistics. For example, goals, assists, through balls and big chances were all slightly more important to picking up points than the most significant defensive fields such as headed clearances and ground duels. This seems to suggest that the all-action central midfielder is more important in attack than defence. As a result my rating has 5 offensive statistics which rate the 48 midfielders with points from 1-6 (worst to best), 1 neutral field (pass success rate, middle third), and 3 key defensive statistics each with a maximum of 6pts on offer for the best 8 midfielders in each category. Errors leading to goals and red cards were so infrequent that it seemed unfair to apportion too much significance to them to I simply deducted a point per occurance for each player.

The final table is below. Note the absence of any Swansea or Arsenal players from the list: this is because neither team set up with a formation including a CM as per my definition – both Rodgers and Wenger prefer to employ the 4-2-3-1 formation. 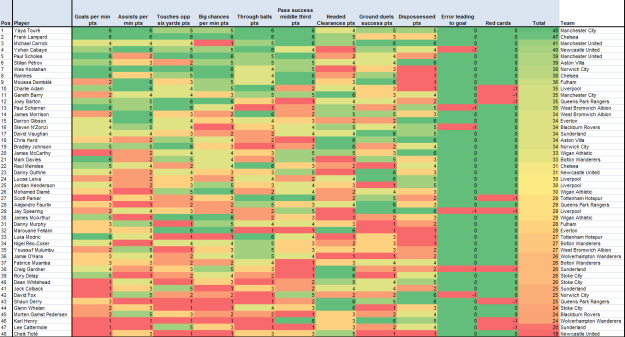 The winner is another Manchester City player: Yaya Touré. Touré was without doubt instrumental to City’s success last season and as we can see from the rating he was excellent in all the categories that matter in my chart. I am starting to wonder if there is an inherent bias in the data MCFC have made available to the public considering how many categories City are dominating! The reality however is that the best players in the best teams should generally stand out in this type of analysis. Arguably Touré’s best statistic is middle third passing success, in which he was 2nd best overall. On average he completed 17.1 passes in the middle third before one was misplaced which compares to an overall average of 7.5 (successful passes:unsuccessful passes). However the winner in that category was the influential Paul Scholes, who on average completed a colossal 23.3 passes before one was misplaced!

Notable players in the top 10 include Stiliyan Petrov (whose season was sadly cut short due to his diagnosis with leukaemia) and Wes Hoolahan, both of whom were key midfielders who played for bottom half teams. Petrov was strong in most fields, but had a particularly low rate of being dispossessed, whilst Hoolahan was very strong in offensive categories – with similar attacking qualities to Frank Lampard.

Steven N’Zonzi, who was the player from a relegated club with the highest position, rated =14th in the list despite being considered by many to be a defensive midfielder – a significant result considering the general lack of more defensive-oriented CMs in the top half of the list.

For the second post running a Newcastle player finished last – surely not?! Rated by many to be one of Newcastle’s outstanding players, Cheick Tioté’s qualities are clearly not suited to this system. As we might expect, Tioté’s offensive statistics were poor: he didn’t score, he made one assist and played one through ball all season. What is perhaps more surprising is his below average middle third passing success ratio (6.5), the fact that he lost more ground duels than he won (169 to 122) and he was dispossessed more times than any other CM (69 in total).

And another surprise in the form of Luka Modric, who might be assumed to perform well in this model but only rated 33rd. These players deserve better, and so at a later date I will look to ascertain the qualities that set them apart from the crowd.